It was one of the most ill-fated ventures you would never, ever want to invest in.  Venture capitalists had backed a group of religious zealots, and bought them a ship with a captain navigating more by rumor than knowledge.  They were to set sail for a land none of them had ever seen and knew darn little about – a moot point, since they missed their destination by literally a thousand miles.  The executive plan was for these cult members to disembark, build a colony, grow something profitable (probably tobacco), and find some way to ship it back to the investors who would make grand profits.  There was not one farmer among the entire crew.

Now, one year later, in 1621, these Mayflower pilgrims were reaping the harvest of their inexperience. The meager crop production amounted only enough to export into the colonists’ bellies, if winter was not too long.  More than half of the pilgrims who had landed a year earlier and struggled into settlement at Plymouth Plantation were dead.   And yes, they also were smitten with an epidemic.  So what did these 50 remaining pilgrim venturers do?

They did what human survivors always do – they rejoiced.

* Half of us are still alive.  The demographic glass is half full.

* We’ve been relatively welcomed by an overall kindly group of knowledgeable Wampanoag native folks who had saved us from our own agricultural ignorance.

* Our Mayflower Compact, which guided our self-governance, has held.  “Just and equal laws for the general good” had been passed. And peace, for the most part, prevails.  No knife fights over food – yet.

* The silos hold a some surplus

* There are no icicles hanging from our noses – not bad weather for Massachusetts this time of year.

You just gotta love humanity.  We are innately such admirable boot-strappers.  We always want to lift ourselves up, no matter how vast the disaster.  Somehow, we close our eyes to all that bottom-line logic of circumstance, that would indicate holding a day of grievous mourning.  Heck with that.  We spit in Fate’s eye, and holler out, “Let’s Celebrate.  Let us Give Thanks!”  We sing.  We feast.

And you know what?  It works.  When you dredge your memory and roll out a roster of your blessings, the mind irresistibly starts focusing on the good.  Gratitude, that most positive of emotions, takes root and all those assets lying around your life start to glisten with potential.  This Thanksgiving countless wise individuals will offer many reverential reasons on why we should give thanks.  And they will be truly right.  But, if you will, allow me to proffer my own take on giving thanks:  We need it – You need it – it’s a vital thrive/survival tool that defies reason, yet sets us on the best possible track.  Oh, and of course, celebrating and giving thanks is fun.

Have a joyful Thanksgiving – and may it long continue throughout your year,

You Know It, The Lunatic Practices In The World Of Business That Will Fill A Book. So We Did!  Visit "In the Words of My Wife’s Husband" book page. 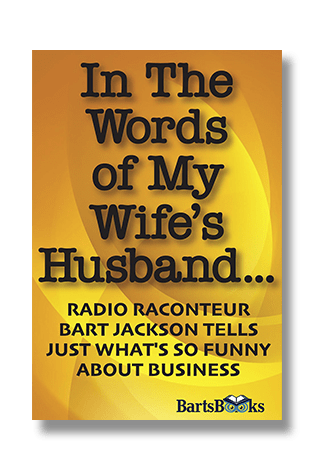 Bart is the purveyor of some pretty damn clever comedy stylings…you’ll have a much funnier opening for your formerly droll speech by using this incredibly light-hearted, joke packed volume.

Wisdom disguised with humor…Bart uniquely elucidates another dimension of truth…read it in small chunks and savor each chapter like your favorite wine!

Every speaker planning to make a presentation should have a copy of this book at his side because it will add value to the value of his talk.

“Humor focusing on serious has, over the centuries, helped mankind retain some level of mental health. In this book, I believe Bart Jackson has cheerfully pushed this concept forward relative to our adventures of business today. …I recommend you read it and get copies for several of your business colleagues with whom you can then chuckle about your own shared business war-stories.”

Tosha Anderson, founder of The Charity CFO, lays out for charities & non-profits the mandatory adaptations, where new funding sources lie, how to woo and maintain business sponsorships, and an array of new, vital fiscal tools. Listen in to:  Charities’ Survival Guide in Covid Times https://theartoftheceo.com/ 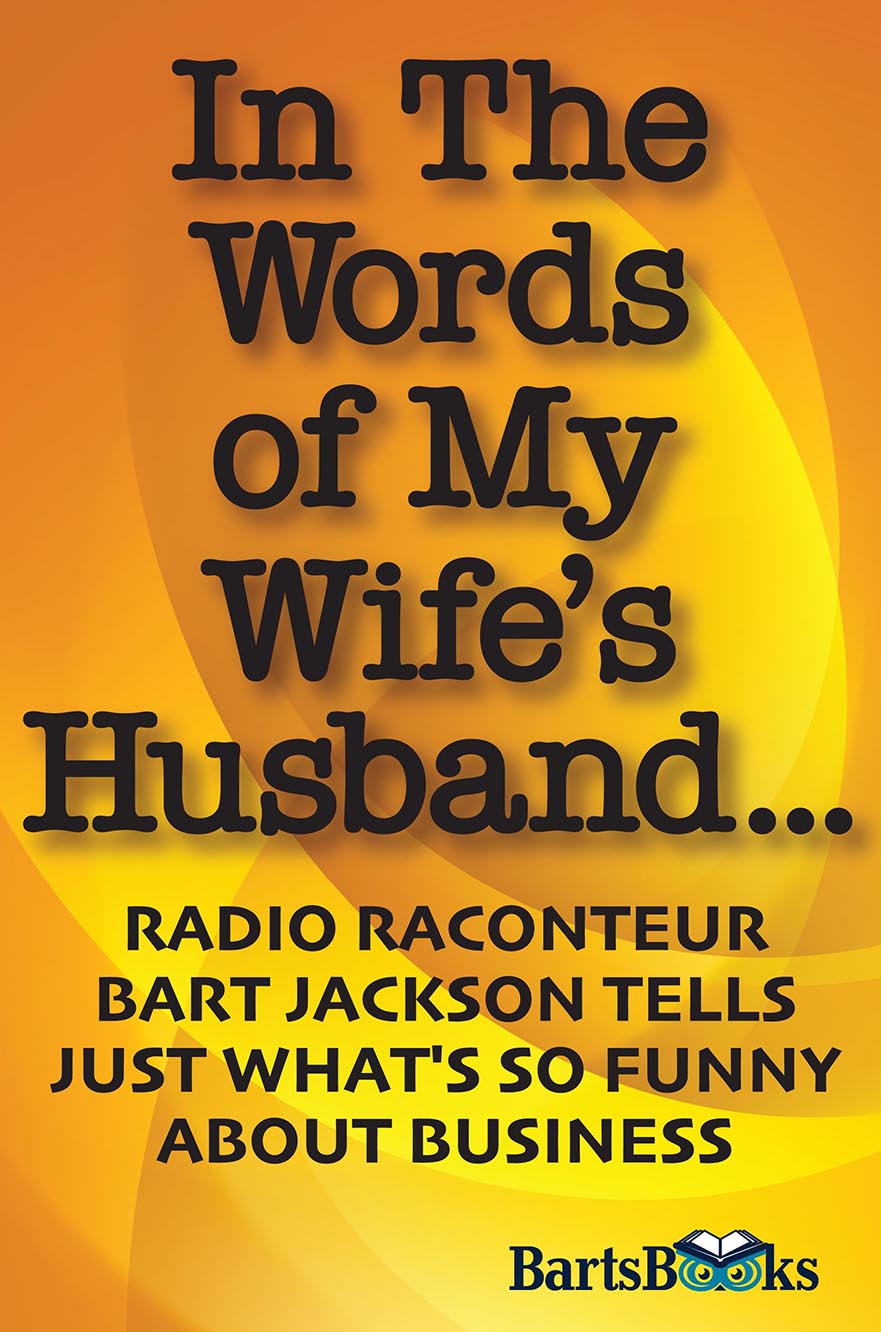 At last, here is your complete sourcebook of business humor.  Here’s your chance to dip in, seize a fistful of wry wit, and pass it along to your fellow chaingangers at work.  Bart Jackson believes that the greatest wisdom flies in on the wings of laughter, and for the last decade he’s become known as the man who portrays business in the jocular vein.   Bart’s Business Quips books have provided professionals with barrelsful of quotable zingers to spice up their workdays and their presentations.   As host of The Art of the CEO radio show, Bart has been joyously jesting at the lunacies, piercing the pomposities, and celebrating those clever, inventive folks who make up the business community.  This volume culls and combines the very best and funniest of his quips, jovial repartee with radio guests, and those sardonic, final takeaway Parting Shots which Bart always launches with, “In the Words of My Wife’s Husband….”  May you read, laugh, share, and grow nearly wise. P.S. Don’t miss Bart’s Curmudgeonopedia with its devilish definitions of business jargon.

The Art of The CEO @artoftheceo
2 weeks ago
Client Psyche https://t.co/AXouFJuHwy
View on Twitter
0
0

The Art of The CEO @artoftheceo
2 weeks ago
CEO of Yourself Giving you a plan for a more fulfilling live.
https://t.co/Mdj1omzLFw
View on Twitter
0
0

The Art of The CEO @artoftheceo
4 weeks ago
Wisdom: Long & Short https://t.co/bbMTk48GYU #vr4smallbiz
View on Twitter
0
0

The Art of The CEO @artoftheceo
1 month ago
What $$ Can’t Buy https://t.co/hVGhvHOaEb #vr4smallbiz
View on Twitter
0
0

The Art of The CEO @artoftheceo
2 months ago
Necessity’s Unfunded Father https://t.co/hTHC0Ushnj #vr4smallbiz
View on Twitter
0
0