Friday, November 16 Bart and Lorraine joined the guests as Governor Phil Murphy and his wife Tammy as they opened the doors of their Drumthwacket residence to celebrate Governor’s Cup Garden State Wine Awards.  ‘Twas a glorious opportunity to celebrate & sample New Jersey’s exploding, world class wine industry, and for Bart & Lo to meet so many old friends they made in authoring The Garden State Wineries Guide. 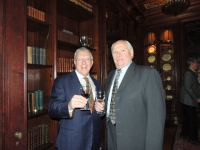 NJ Secretary of Agriculture Doug Fisher (left) and Bart prepare a bottle swap of their own homegrown wines. 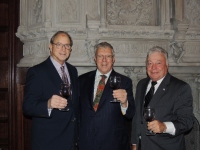 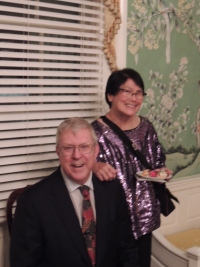 Yesterday, 11 days prior to the midterm election, I joined in a spirited discussion about whether the US needed an electoral college.   What made it enjoyable was that this was a discussion of gentlemen earnestly seeking an honest answer, none of whom came armed with an intractable opinion.  As we hammered at the issue, one historical element came up several times: the founders of our nation felt that the great mass of people were too easily swayed and not quite bright enough to elect the best possible leaders in a straight popular vote.  Their decisions would not, our nation-framers felt, be trustworthy.

I have no intent here to debate that assessment, or whether it was indeed the founders’ consensus.  But allow me to hold out one warning: a whole host of forces involved in the political process seem actively intent on dragging you down to that level of incapability.

* Alas, too much of the media election reports focus on presenting the spectacle and speculation of the horse race.  Discussion of issues, apparently, lack the byte-size appeal of your minimal attention span, and are shouldered aside for the latest news of who is nudging ahead of whom in the polls.

* The political parties, who amongst themselves currently refer to John Q. Public as “Joe Six-pack,” too often operate as if slime most motivates you.  The more desperately they can tar the opponent, the more likely they are to settle for their candidate.

* Too many of our would-be public servants – those individual candidates tossing their hats in the political ring – have, I fear, swallowed a terrible myth:  they believe the money alone wins elections.  Your precious vote is for sale to the individual who can gather unto her/himself the grandest war chest – regardless of the source.

But you – the voter – still retain the power.  And this fellow citizen begs you to take heart.  Too much of media – too often political parties – and too many candidates are not all.  Appearing on ballots everywhere are excellent, astute individuals dedicated to the public’s welfare.  You have the ability and the time (oh, yes you do) to find those beneficial, devoted people who can and anxiously will strive to make ours a better nation.  Special interests thrive only when there is a vacuum.  So why don’t we fill the vacuum and take our citizenship seriously and show who really runs this nation?  Shall we each individually prove to our founders and leaders that we’re a lot more capable of running our nation than they believe we are?

Isn’t about time people started listening to you?  Time you got the influence you deserve and the reactions you require? Presentation coach to President Carter’s cabinet and major C-suiters, Ms. Stephanie Scotti lays out an incisive, masterful strategy that will have you taking command of the podium and speaking effectively.

For the last 24 years Stephanie’s Professionally Speaking firm has provided individual and team mentoring for individuals facing the often fearful challenge of presenting their ideas in all business situations.  You can catch the Scotti method by reading Stephanie’s recently published Talk on Water – Attaining the Mindset for Powerhouse Presentations– or you may tune in and listen to Coach Scotti dissect the verbal ramblings of host Bart Jackson, as he delivers them right on the air.  If Stephanie can repair this host, there is great hope for you, my friend.        www.theartoftheceo.com