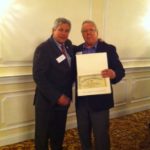 June 2 – NJ Senator Chris Bateman thanks Bart for his continued volunteer services and donations to the South Brunswick Public Library. Bart’s wife Lorraine ably directed the library and saw it through three major expansions throughout her career. Later, at the Library’s celebratory Volunteer Appreciation Breakfast, Bart presented the Director’s Choice Award to that employee whom Library Director Chris Carbone judges to have contributed the most to the Library over the past year. The award, which Bart and Lorraine Jackson founded and sponsor, provides the winner and her/his best beloved a getaway weekend to the paradisal spot of their choosing – all expenses paid. Proof that hard work and dedication pay off.

When Thomas Jefferson said, “I fear the citizens of this land have no idea of the power they possess,” he might well have been targeting the lackadaisical citizenry of the Garden State. Tomorrow, Tuesday, June 6, the people of New Jersey are called to the polls to vote in the primary for their governor. A turnout of between nine and 14 percent of the eligible voters is expected.

New Jerseyans, like most Americans, appear tired, and very, very sick of politics as it is being handled by the current crop of politicians. New Jersey’s waning Governor holds a historically low approval rating, scraping the single digits. Nationally, more than two-thirds of the nation disapprove of the President’s job, while Congress labors diligently to prove itself bought, paid for, and unaffected by the public will.

So is this the time for the American voter to rollover and play dead?
If you would like to absolutely guarantee more of the kind of politicized governance we now are experiencing – stay home tomorrow. Send a message to those in power that you truly do not give a damn what they do. Show them that you are, as one party refers to the public, just “Joe Six-pack,” and you prefer to be led by whichever sloganeer grabs your nose ring. Get bored and you will truly achieve the kind of government you deserve.

New Jersey has four major and several smaller party candidates running for Governor. All of them have labored hard to inform you what they believe, and to win your vote. One of them even has invested $16 million of his personal funds to tell the public his plans for governing the state. Each candidate is worthy of your consideration.

We stand on the verge of getting the government we desire. So I beg you remember Mr. Jefferson’s words: Every government degenerates when trusted to the rulers of the people alone. The people are its only safe depositories.

Wishing You Every Success,
– Bart Jackson 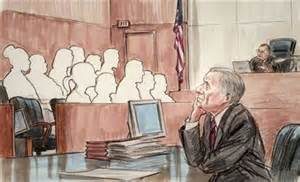 “People have fought and died for the right to be judged by a jury of their peers.”  The instruction video had announced it to the 300-some folks sitting in that basement room of the Middlesex County courthouse.  Now the Judge Vincent Leblon had just said it again to us of the 40-person jury pool in his courtroom.  And for petit juror 0689, these words struck home.

I was fully aware that today, most American citizens would be battling almost as ferociously to avoid sitting on a jury as our forefathers had to win us this vital freedom.  Previously, upon learning of my notice to report, all my friends had audibly sympathized with my being called up and proffered their best tips for wrangling an excuse from serving.

Yet here I sat, in the eight-person jury box, having dodged several sidebar questionings each of which could have won me an excuse.  The dental surgery could be postponed.  I could re-schedule the two radio shows, and pass on my friend’s funeral.  The judge had convinced me – serving on this jury was important.  Then, during the final round of questions one of the lawyers deemed me not to his liking and I was dismissed.  There would be no trial for this citizen.  My life could get back to normal.    No exciting interruptions, all my best-laid plans could take place.  Life could resume its predictability.  Although a bit relieved, I walked out of Middlesex County Courthouse with a sigh.

Wishing You Every Success,

can fire you into a powerful force of one.

But Compassion will put an army behind you.”*

It is one of my less funny quips, but every Ides of January it seeps back into my mind.  Dr. Martin Luther King displayed the power of compassion like few others seen or recorded in human history.  In August 1963, an estimated a quarter million people joined the March on Washington following Rev. King.  They embraced his mission and dream of civil rights in America.  That’s two and a half times the number of soldiers either Adolph Hitler or Genghis Kahn could muster as they launched their bloody campaigns.

‘Tis a simple, yet oft neglected human truth:  Show people that you hold a sincere concern for their pain and want to alleviate it, and they will flock to your banner much more readily than if all you can say is, “we both hate the same group of other folks.”  Loyalty comes from love and lasts a lifetime.  The rallying point of mutual hate is a flickering flame and must ever be fueled with fear.

The hopeful news is that more and more business leaders’ eyes are opening to the power of compassion.  That feeling of honest concern sustains in a way that all the other whipped-up motivational techniques are powerless to bestow.  I do indeed witness this hopeful shift.

So may we all this day honor the amazing tangible and inspirational achievements of Dr. Martin Luther King.  Yet, if I may, allow me to point out one major pitfall.  Beware of labeling Mr. King or any other individual of note as a “genius.”  This term is too often employed as as an easy avenue into inertia.  “You know, King, Einstein, Jobs – they were geniuses.  I am not so gifted, so why should I bother?”

Well, my friend, you have every bit of the genius you require to make your mark.  It is not how fertile stands the land you were given – it’s how well you cultivate it.  Perhaps in memory of Rev. King, now is the time for all of us to get our hands dirty.

And please, don’t keep compassion in your heart.  Let it out to roam and glisten on all you meet.