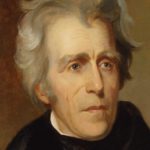 He saw himself as the people’s lion.  In 1829 Andrew Jackson mantled the immense responsibility of seventh President of these United States.  And under his powerful leadership, the Presidency was reshaped forever.  Tough and battle-scared from defending this nation, Old Hickory stepped into office devotedly believing that the President, as the sole individual elected by all the people, was  mandated to ferociously protect their lives and interests above all else.

He battled avaricious bankers, self-serving and special interest congressmen, and secessionists who would rend our democratic republic apart.  Andrew Jackson stood as the prowling, fiercesome lion ever ready to claw the greedy few seeking to enrich themselves by oppressing the many.  In this moral quest, Jackson engaged his blunt personal force and every political trick in the book.  He established the presidential veto as political tool, employing it more than all his predecessors combined.  He expanded the lawmaking role of the nation’s chief executive.  He launched the tradition of the presidential road-trip as a tool to gather public consensus.  In short, Jackson believed in democracy and the American people – a belief that won him the title of “King Mob” from many a wholly-owned congressman.

It is a marvelous thing to witness any person motivated by firm moral conviction.  And Andrew Jackson opened the doors for all future United States’ presidents – opened them to build roads, clean our air and water, expand pubic education, preserve our parks, protect the drugs sold to our people and make secure the investments made by them.  Such is how many of Andrew Jackson’s succeeding Presidents have used their expanded role.

Promulgated by the self-serving within this nation, there currently grows the myth that all government is bad government.  True freedom, they assure us, may only be achieved by doing away with all government – the less the better.   Alas, Jackson knew, and we have seen, that the destruction of our protective government affords freedom only to those greedy few, ever waiting to enslave and grow rich from the citizen many.

So on this Presidents’ Day may we all pause to honor those American Presidents who have defended the people of this nation.  We applaud these leaders who have struggled to preserve our “democratic experiment” and place the interest of the people as their foremost driving conviction.    May the women and men who hold this presidential office in the future mantle on Old Hickory’s legacy and his resolve.

Wishing you Every Success,

The Art of The CEO · 2 weeks ago
@artoftheceo
The Perfect Entre https://t.co/i4aW83W4N1 #vr4smallbiz
View on Twitter
0
0

The Art of The CEO · 3 weeks ago
@artoftheceo
The Earth Does Not Move https://t.co/DujsPbBEJp #vr4smallbiz
View on Twitter
0
0

The Art of The CEO · 4 weeks ago
@artoftheceo
In Whom Do We Trust? https://t.co/WrDnhPzSj1 #vr4smallbiz
View on Twitter
0
0

The Art of The CEO · 1 month ago
@artoftheceo
The Final Spin https://t.co/4cIRfKqV6a #vr4smallbiz
View on Twitter
0
0